Unfortunately, Scout cracked both of his carpal pads last weekend. Carpal pads are E in the diagram below (from Wikipedia): 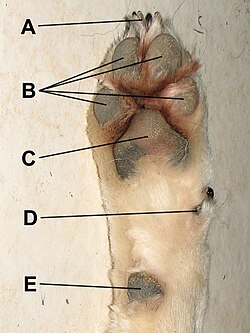 From what I’ve gathered from various articles, carpal pads help dogs to slow down, like brake pads. Apparently carpal pad injuries are fairly common, particularly if your dog spends a lot of time on concrete/asphalt/other hard surfaces. Regardless, they are pretty frightening to see. Don’t worry, I’m not going to include pictures of his gross injuries. Basically, he ripped both of his carpal pads while playing in our backyard. I’m guessing this happened on a rock when he was playing fetch.

It was a relief to look back and realized he wasn’t acting any differently so I guess he wasn’t in too much pain. When we realized his injury, we read about 30 articles on how to treat them. He didn’t bleed or truly break skin, so I was pleased about that.
How we ended up treating him was:

We learned after the first day to be sure to wrap it loosely because his poor paw swelled up to twice it’s size! We significantly loosened his wrap before bed and he was fine the next morning. We kept his wrap on all last weekend while we were home with him, including while he slept. After the weekend, we took his bandages off during the day because we didn’t want him to eat them while we were away.
After the first day, we didn’t wrap him again because he was healing. We did read that it is encouraged to remove any excess skin, however I couldn’t bring myself to do it. My husband arbitrarily decided to remove it this weekend, however Scout managed to get everything worked out on his own.

At first he was pretty bummed about it and wasn’t sure he could even walk. My husband had to carry him to the couch!

After a while, he figured out he could still walk about everything was alright. He got cuddly and attention-seeking again!

If you want to see more photos of our dogs, Scout and Atticus, feel free to follow us on Instagram!

This post contains affiliate links. If you make a purchase through links listed on this page, I may receive a small commission.

What minor injuries have your dogs experienced?